Home  > INFO CENTER  > NEWS  >  Steve Kerr calls out Patrick Beverley, refs: 'He's gonna get whiplash on some of these flops'

Steve Kerr calls out Patrick Beverley, refs: 'He's gonna get whiplash on some of these flops'

The Los Angeles Clippers stunned the Golden State Warriors at Oracle Arena Wednesday for the second time in their first-round series.

Clippers guard/agitator Patrick Beverley is a big reason why.

The veteran guard whose primary duty is to frustrate opponents with his physicality and his mouth once again got into the head of his opponents.

It’s a tactic he executed to perfection in Game 1 when he goaded Kevin Durant into a pair of technical fouls.

Aside from the obvious edge of provoking Durant to the point of being ejected, he was in Durant’s head, prompting an apology and an explanation from the Warriors superstar for accumulating technicals the next day.

On Wednesday, Draymond Green became Beverley’s victim. As the Warriors looked to rally from a halftime deficit, Beverley stood his ground to take a charge from Green as he backed into the basket early in the third quarter.

Green leaned in with his post move, and Beverley went flying to the ground to draw an offensive foul call.

Pat Bev draws a charge with one shoe on, Draymond gets a tech.

This game is WILD pic.twitter.com/u9rgs4riHH

Green, visibly frustrated, stepped over Beverley with a knee that barely missed connecting with his chin. Technical foul on Green.

Danilo Gallinari hit the technical free throw on the other end. Beverley’s defense on Green resulted in a three-point swing in a game that went down to the wire, a difference-making effort.

And just like he did in Game 1 with Durant, Beverley got his opponents talking about him in the media the next day. Except this time it wasn’t his counterpart on the court.

“I didn’t think it was a good call,” Kerr said. “You know Beverley’s gonna flop in the paint, and Draymond turned — it looked like Mike Tyson punched him in the face.

“Beverley’s good at that. His head literally snaps back. I’m worried he’s gonna get whiplash on some of these flops. But he’s good at it.”

Where Durant’s message after Game 1 was one of accepting blame, Kerr’s was one of frustration — and one for the officials.

“The refs, they’re often times partial to the little guy who’s down there,” Kerr said. “I didn’t like that particular call. I know Draymond didn’t. Hence the technical.”

Kerr was ready to talk about Beverley

Note that Kerr’s rant did not come in response to a question about Beverley. A reporter asked the Warriors coach about whether Green was trying to get his teammates going on the sequence.

Kerr volunteered his take on Beverley and the foul call in what sounded like a message he had ready to deliver for his media session.

It’s safe to say the Beverley has effectively gotten into the Warriors’ heads, all the way up to their head coach.

Beverley wasn’t the only source of frustration for Kerr during Thursday’s media session. If the background music in the above clip was distracting to you, it was as well to Kerr.

Awkward moment at practice today. Steve Kerr wants the music down so media/reporters can hear questions/answers. Appears Draymond Green, who’s going through intense shooting routine behind scrum, wants it up. It stays up. pic.twitter.com/JcFp10X05o

Kerr twice asked for the music playing in the background during his media scrum to be turned down. The second time he asked, he was told that “Draymond wants the music up.”

The music stayed up. As did Kerr’s frustration. 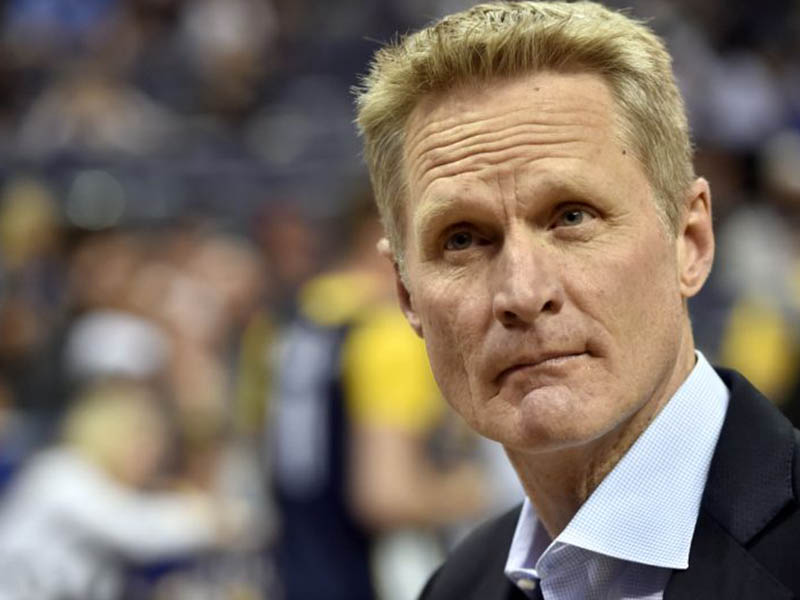 Patrick Beverley now has Steve Kerr complaining to the media about him. (AP)